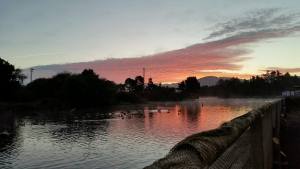 Dorothy Ann Winchester left this world for her final resting place quietly at her home August 2, 2021 after a relatively brief decline in her health. Her husband of 50 years and family were at her side. She was born September 7, 1938 in Bellingham, Washington to Joseph and Bertha Dwyer. She was baptized into the Church of the Nazarene.

Dorothy received a Bachelor of Arts degree at Cascade College in Portland in 1961. She taught in The Dalles for 30 years. Her skills in art ability earned her extra assignments because of her creative artistic talents which were recognized frequently. Many letters of commendation from The Dalles Junior High School are on record in her file thanking her for the extra efforts at all times. She officially retired from teaching in 1991 but continued with studies in arts as an upper division graduate.

Dorothy's interest for adventure took her on many travels from Europe to South America and many trips throughout the United States. She will be remembered by her charming and happy smile and her quiet and quick wit.

Dorothy married Otis Winchester in 1970 at the Welches Log Church on Mt. Hood. The newlyweds honeymooned in Vancouver Canada. Last August their 50th wedding anniversary was celebrated with a surprise drive-by party including many cars, fire engines and police escorts. Covid prevented having a large party indoors, but the event with balloons, banners and signs were special and evidences of the day and were enjoyed many weeks indoors as balloons bounced about and colorful signs reread, and many cards also.

After the move to Lincoln City, Dorothy enjoyed her days working many, many hours with the North Lincoln Hospital Auxiliary for 25 years. She offered her talent to many social events and decorated tables with delightful floral designs and very creative centerpieces. She was honored for her efforts and talents at a special recognition party.

Other involvements included Macintosh Users Group, the Family Community Leadership of Lincoln City, Friends of Wildwoods membership, the Community Chorus and church groups. Dorothy sang in the choir at Chapel by-the-Sea Church for years and was decorating chairperson for all dinners and special events including the 75th anniversary of the church.

The Winchesters had an alternate family with three nephews. two nieces. three foster daughters and a forever foster son. Many other young folks figured into their lives and had assistance and caring from 'Aunt ' Dorothy and 'Uncle' Otis. She is survived by her husband Otis, a bother Norman Lee Dwyer of McMinnville; another brother Daniel preceded her in death.

A memorial will be held when covid restrictions allow and her cremains will be on Mt. Hood. Pacific View Memorial Chapel is in charge of arrangements. Memorials may be made to Chapel by-the-Sea Presbyterian Church.

To send flowers to the family or plant a tree in memory of Dorothy A Winchester, please visit our floral store.

You can still show your support by sending flowers directly to the family, or by planting a memorial tree in the memory of Dorothy A Winchester
SHARE OBITUARY
© 2022 Pacific View Memorial Chapel. All Rights Reserved. Funeral Home website by CFS & TA | Terms of Use | Privacy Policy | Accessibility